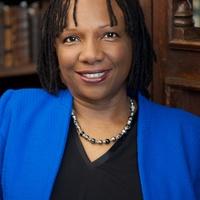 Speaker at the Social Sciences Oxford Minds panel discussion series on the topic of Race.

Patricia Daley is Professor of the Human Geography of Africa and Director of Undergraduate Studies. She is also Vice-Principal and The Helen Morag Fellow in Geography at Jesus College, Oxford. She was co-founder of the Oxford University Black and Minority Ethnic staff network. Her research explores themes including the political economy of population migration and settlement, racial hierarchies and violence, intersectionality and feminist geo-politics, and political ecology, mainly with a geographical focus on East and Central Africa, and also the UK. She is author of Gender and Genocide in Burundi: The search for spaces of peace in the Great Lakes Region (James Currey 2008) and co-editor (with Elena Fiddian-Qasmiyeh 2018) of the Handbook of South-South Relations (Routledge, 2018). Her articles have appeared in Political Geography, Third World Quarterly, and Migration and Society. In addition to academic fora, Professor Daley speaks at community events and to the media.