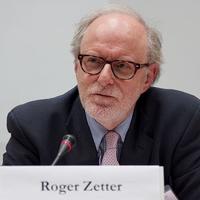 Panel speaker at the Social Sciences Oxford Minds lecture series on the topic of Belonging.

Roger Zetter is Emeritus Professor of Refugee Studies, retiring as the fourth Director of the Refugee Studies Centre in September 2011. His long association with the RSC commenced in 1988 as Founding Editor of the Journal of Refugee Studies, published by Oxford University Press, a position held until 2001. In an academic career spanning over 35 years and with regional expertise in sub-Saharan Africa, Europe and the Middle East, his teaching, research, publications and consultancy have included all stages of the ‘refugee and displacement cycle’. He has written over 45 peer reviewed journal papers, six books, 32 book chapters, 21 major research reports/monographs, and numerous op. eds. His 1991 Journal of Refugee Studies paper, ‘Labelling refugees: forming and transforming a bureaucratic identity’ is one of the most widely cited in refugee studies. For the centenary of Oxford University Press Journals, the paper was selected as one of the 100 most influential papers published over the previous century.