Oxford’s extensive library and museum collections can now be accessed and explored from your phone or tablet using ‘Cabinet’, an award-winning online platform created by academics and staff at Oxford University.

Developed by a team led by Dr Kathryn Eccles (Oxford Internet Institute), Cabinet gives online access to rare artefacts from Oxford’s collections and beyond. Precious cultural objects are now instantly accessible via phone, tablet, laptop or other connected devices. Students, staff and the general public can explore special collections from around the world – wherever they are in the world. 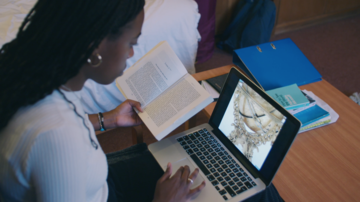 Cabinet progressed from pilot project to a valued university service in under three years. It has received an OxTalent award, been written into the university’s GLAM digital strategy and now sits on a top-level university domain (http://www.cabinet.ox.ac.uk). It has also scooped four teaching project awards and a teaching excellence award for staff who have used the platform with their students.

Dr Eccles, who has spent the last decade studying the impact of digitisation on cultural heritage materials, says it was a conversation with colleague that sparked the idea.

'A colleague of mine in the Faculty of History, Professor Howard Hotson, mentioned that he wanted to make more material culture available to students, but felt hampered by the current technology. We got our heads together with two other colleagues: Giovanna Vitelli, then head of the University Engagement Programme at the Ashmolean, and Silke Ackerman, Director of the History of Science Museum.

'We came up with the concept for Cabinet, which was then built by the fabulous Ted Koterwas and the Web and Mobile Development team at IT Services.' 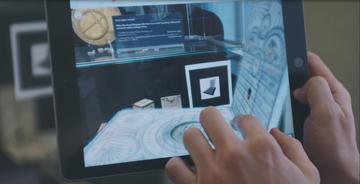 Objects on the Cabinet platform are digitally rendered in 2D or 3D, allowing them to be explored, annotated, zoomed into, and spun around. Thanks to the use of photogrammetry, a technique used to create models of museum artefacts for ‘virtual handling’, users can access a vast range of full colour 3D models - anything from tiny artefacts to historic monuments. Maps, charts and other two-dimensional documents have also been digitised or imported using the IIIF framework, with minimal loss of quality from the source.

Cabinet’s pioneering work is also reaching beyond the lecture theatre. A collaboration with the RNIB’s ‘Sensing Culture’ project has used 3D printing to allow partially sighted audiences to touch and experience museum objects and architecture. The tool has also recently been used in work with local schools to enhance classroom teaching. Pupils were delighted by the virtual handling experience, saying: 'You don’t get to touch historical artefacts very often. You don’t have wear gloves and you’re not afraid of breaking anything.'

The Cabinet team aims to continue making the treasures of the past accessible to the modern world. Their latest endeavour is the new ‘Open Cabinet’ web app made in collaboration with the Pitt Rivers Museum. Dr Eccles explains: 'The app uses machine learning to recognise what's inside a museum case, then uses augmented reality to make the object appear to pop out of the case. Visitors can then rotate the 3D virtual object, while spending time with the original in the museum. We see it as a way of closing the gap between digital engagement and the 'real thing'.'