Lucie Cluver is a Professor of Child and Family Social Work with the Centre for Evidence-Based Social Intervention at University of Oxford’s Department of Social Policy and Intervention.

She works closely with the South African government, UNICEF, UNDP, the World Health Organisation and with other international agencies to provide evidence that can improve the lives of children and adolescents in Sub-Saharan Africa. 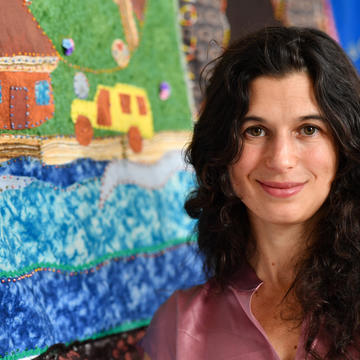 A former social worker from South Africa who first set out to help children orphaned by AIDS is now embarking on the enormous task of supporting 20 million adolescents in 34 countries across Africa through research.

The Hub is funded by UK Research and Innovation through the Global Challenges Research Fund (GCRF). At its core, it aims to identify cost effective solutions to complex social and societal issues.

The Accelerate Hub builds on Dr Cluver’s extensive research in Sub-Saharan Africa over the past decade.

She began her academic career whilst working as a social worker in South Africa in 2003. At the centre of the AIDS epidemic, with more and more children losing their parents to the syndrome, Cluver asked the simple question: “What can be done?”

She said: “I never intended to become an academic. I was working with children whose parents had died from AIDS, and I asked NGOs what could be done on a practical level. They told me they needed research. It proved to be a really important question.”

In 2004, she was awarded funding from the Economic and Social Research Council (ERSC) for a doctoral position based at Oxford. The project began by interviewing 1000 children, of whom half had lost their parents to AIDS, to understand gain greater understanding of their needs.

Dr Cluver then wrote her first policy briefing paper. A colleague and mentor in South Africa was able to introduce her to the then Minister for Social Development, with whom she could share her findings. He declared her sample size too small.

She went back to the drawing board to extend her survey to a new study: Young Carers SA, between 2010-2012. Over 6000 children and 2500 caregivers were interviewed.

“That’s how I became an academic. It was a succession of things that needed to be done in order to help these children.”

During this work, UNICEF approached Dr Cluver to research the impact of social support grants in reducing HIV risks amongst young girls.

She said: “When families are living in desperate poverty, teenage girls often have few other options than to find an older boyfriend, who can provide food and basic provisions for their household. It’s very much a transactional relationship which puts the young woman at high risk of HIV.

“By introducing a government social benefit of around $20 dollars per month, it takes away the need for this relationship.”

The research found that this family cash benefit could reduce girls’ risk of HIV infection by up to 50 per cent. And adding parental support to make ‘cash plus care’ could protect them even more. This led to a number of publications, with findings continuing to influence policy within South African government plus NGOs UNICEF, Save the Children, WHO and USAID.

It brings an interdisciplinary approach, uniting researchers from Oxford’s departments of Social Policy and Intervention, Tropical Medicine, the Blavatnik School of Government, English, Economics and Psychiatry plus UCL, Edinburgh and London School of Hygiene and Tropical Medicine.

Dr Cluver said: “I really enjoy the entrepreneurialism of being an academic. You can come up with an idea, raise funding and then explore it. It offers extraordinary freedom that not many professionals can claim. You aren’t constrained to a specific role. “At Oxford, you are supported to do the research you want to do. The university attracts the most fantastic, high quality students with brilliant minds.”