The establishment of a world-leading Centre for South East Asian Studies at the University of Oxford moved closer yesterday (10 October 2018) with a Royal launch for the campaign in support of the academic initiative. 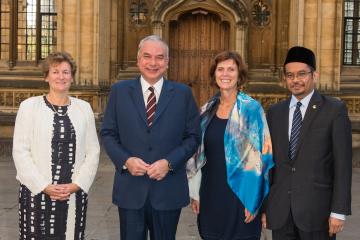 Professor Louise Richardson, Oxford’s Vice-Chancellor, and Professor Sarah Whatmore, Head of the Division of Social Sciences and Council Member of the British Academy, welcomed His Royal Highness Nazrin Shah, 35th Sultan of Perak, to the institution’s historic Sheldonian Theatre. Sultan Nazrin – who serves as Chancellor of the University of Malaya – is a political scientist and active scholar with longstanding interest in the socio-economic development of Malaysia and its surrounding region. An Oxford graduate in Politics, Philosophy and Economics (BA Hons), he also holds higher degrees in Public Administration (Masters) and Political Economy and Government (PhD) from Harvard University.

Welcoming the South East Asian Studies Centre initiative, HRH the Sultan said: 'By creating dedicated focus for research and teaching excellence in South East Asian Studies, Oxford will make a significant contribution to the global academy. Very few universities in the world can match Oxford for the range and intensity of its academic expertise. This ambitious, thoughtfully-integrated knowledge enterprise will put South East Asia at its heart, benefitting both the citizens of the ASEAN (Association of South East Asian Nations) countries and the people of the wider world.'

The new Centre for South East Asian Studies will be part of the Oxford School of Global and Area Studies. It is expected to create research and teaching opportunities to be shared across several departments including Geography and the Environment, Anthropology and Museum Ethnography, Politics and International Relations, Development Studies, and History.

Oxford was last week rated overall number one in the Times Higher Education World University Rankings for a third successive year. Establishing South East Asian Studies as an area of dedicated focus will further strengthen the University’s research and global reach. Oxford is also currently top-ranked in both Social Sciences and Medical Sciences.