A long-running research relationship between Takeshi Nakagawa (Ritsumeikan University, Japan) and researchers in the Oxford University School of Archaeology has led to the ongoing study of sediment from a very special lake in Japan.

The Lake Suigetsu Project has produced a global benchmark for radiocarbon dating and continues to provide significant data on volcanic eruptions and climate change. The growth of public interest in the lake led to the opening of the Varve Museum in 2018, drawing visitors from across Japan and beyond to experience this extraordinary research destination.

At the heart of this work is a close collaboration between Professor Nakagawa and two scientists working in the School of Archaeology in Oxford: Professor Victoria Smith (a volcanologist leading the Oxford Tephrochronology Group) and Professor Christopher Bronk Ramsey (Oxford Radiocarbon Accelerator Unit).

Located in the Hokuriku region of Japan, Lake Suigetsu provides exceptional conditions for the formation of 'varves' — layers of sediment formed in stripes that allow accurate dating to take place.

Because the lake is still with no connecting rivers and no life on the lake bottom, the varves have been allowed to form seasonally with very little interference. These conditions promised a potentially unique opportunity for paleo-environmental study.

Professor Bronk Ramsey and his team carried out over 600 radiocarbon measurements using these sediment cores, combining the data with varve counts to produce an independent chronology.

This was later integrated into IntCal13, an internationally recognised calibration dataset used to convert radiocarbon measurements into calendar ages. IntCal has proven to be an invaluable tool for researchers using chronology, including geographers, archaeologists and earth scientists. It has been cited over 10,000 times since publication in 2013. 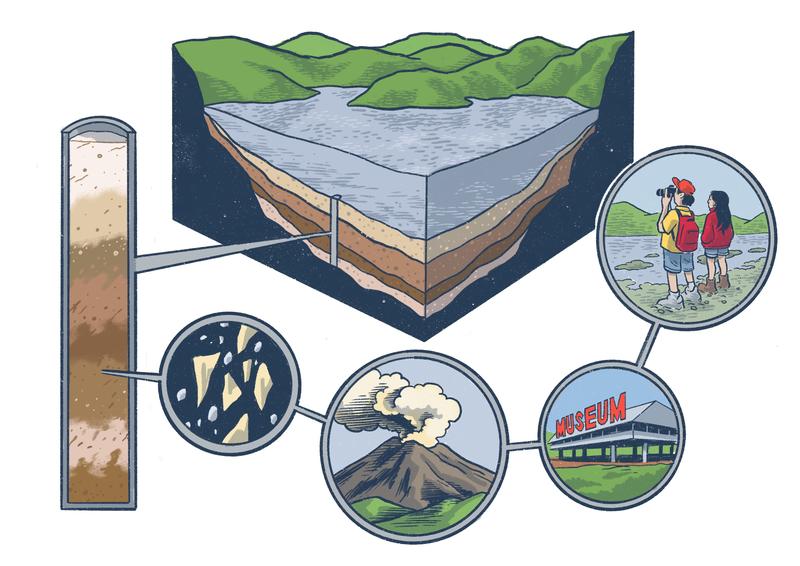 Uncovering volcanic eruptions of the past

The lake’s core also provides a unique opportunity to learn more about the timing and dispersal of large eruptions from volcanoes in Japan and beyond. Volcanologist Professor Victoria Smith joined the Lake Suigetsu Project in 2009.

Using the unusually accurate records of Lake Suigetsu as a reference, Professor Smith uses samples from volcanoes across Japan and neighbouring countries to determine how often these volcanoes have erupted over the last 150,000 years, as well as the tempo of the eruptions and how far the ash has dispersed in each instance.

Professor Smith explains: 'Each volcano has a unique glass chemical fingerprint which, once established, can be matched to the tephra layers in the Suigetsu core. The detailed information from the Suigetsu record allows us to learn a lot about the eruptions of each individual volcano, particularly the size, magnitude and frequency.'

This research has proven highly useful to the Japanese government, who are keen to manage the risk around potential eruptions. Professor Smith says: 'Obviously it’s not something you can ever predict, but it is possible to build up a picture of the potential size and scale of eruptions.' With a dense population and several nuclear power stations located in the country, this research continues to be of vital importance.

Inspiring the next generation of scientists

The original radiocarbon dating project provided a distilled version of the Lake Suigetsu research as a case study for school textbooks. This example became so widely used in schools throughout Japan that many started taking class trips out to the lake. Local and international media coverage of the research also contributed to an increase in visitors.

The lake had started to become a tourist destination, and it was clear that a handful of information signs and limited boat trips were no longer enough to satisfy the public’s interest. The governor of the Fukui Prefecture approached Professor Nakagawa to propose the building of a museum.

The construction of the Varve Museum was agreed in 2014. The Oxford Tephrochronology Group contributed to a re-coring of the lake in order to obtain more material for analysis and form the basis of the museum displays. The museum was then designed around a 45 metre section of the core, set in epoxy, which runs the length of the building.

On first opening in 2018, the museum attracted around 5,000 visitors per month. By August 2020 the museum had brought in 100,000 visitors in total. It has boosted interest in the neighbouring Jomon museum, which saw footfall increase by 243%, and has educated over 4,000 children through school visits.

The museum’s curator, Mr Nagaya, comments: 'The Suigetsu varves are now far beyond the scope of one study and play an important role in the culture, education, tourism and economy of the local community and beyond.'

The successful collaboration between the Oxford team and Japanese researchers over the last two decades has allowed the impact of Project Lake Suigetsu to evolve far beyond the project’s original scope.

Professor Nakagawa reflects on how the scale of Oxford’s contribution is directly reflected in the displays: 'The Varve Museum has two main themes: (i) radiocarbon calibration and (ii) environmental history. The Oxford Radiocarbon Accelerator Unit and Professor Christopher Bronk Ramsey were key for the first theme — generating an overwhelming number of data and integrating the data to produce the chronology. The second theme has two subtopics: climate change and volcanic eruptions, and the latter mostly features research by the Oxford team led by Professor Victoria Smith.'

Professor Smith comments: 'We’re lucky, really, to have had the project develop in the way that it has. Being able to see your research displayed in a museum is definitely a career high.'